That’s a line from Tom Waits’ “I Wish I Was in New Orleans” … I’m posting this from my writer’s bungalow on Burgundy Street (pronounced burGUNdy). There are so many songs, great ones, written about this town. And so many wind chimes in this neighborhood; that’s the soundtrack to my writing, wind chimes and ceiling fans.

I love the history of this town, the good, the bad, the macabre. I lunched at Muriel’s on Jackson Square, which plays a role in my book through the suspension of disbelief that fiction requires; my book is set in 1999 and Muriel’s wasn’t Muriel’s until 2001. I need to get past that … can’t be a perfectionist in fiction. Right? Right.

Muriel’s is haunted. The building was a grand mansion that was partially destroyed in the Good Friday Fire of 1788. After that it was a private residence owned by Pierre Antoine Lepardi Jourdan, who now goes by Antoine. In 1814 Antoine wagered his house in a poker game … and lost. Before he was to move out, he hung himself in one of the upstairs lounges—now Muriel’s séance lounge: 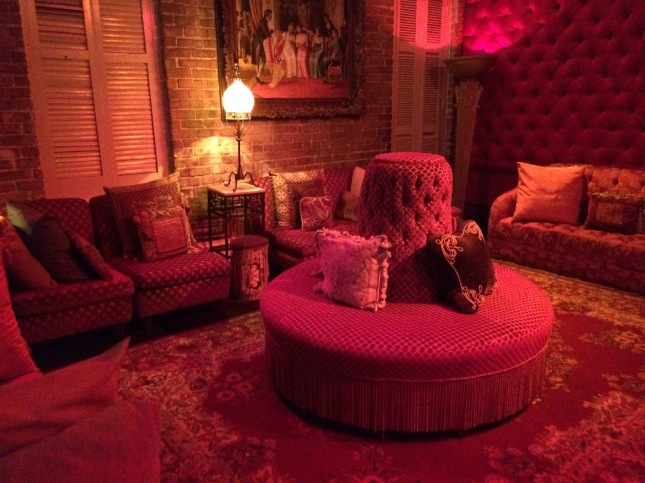 The restaurant keeps a table set for Antoine and a guest:

I spoke with bartenders and diners who’ve had experiences here. Glasses hurled across the room, glowing orbs, that cold feeling that shoots up the back of your neck when you are in the presence of a ghost. Disembodied voices.

You feel something when you’re standing at Antoine’s table. And the room where he died is colder than the rest, though that may very well be the restaurant’s doing. If I owned a restaurant with a resident ghost, I’d probably make his room a bit colder to toy with the nonbelievers.

I wasn’t sure how traveling alone would be for me … as you know, I don’t like to do many things alone … but this has been wonderful. With the exception of the plans I’ve made with friends here, my agenda has been entirely my own. Traveling this way has also given me the opportunity to talk to people I’d probably not meet otherwise, like the theremin player with the Louisiana Philharmonic who was at the breakfast roundtable I joined on Monday. I resisted the urge to regale him with this gem: I’m thinking of selling my theremin; I haven’t touched it in years.

Thank you folks, I’ll be here all week.

4 thoughts on “Arm-in-arm down Burgundy”