Good job on the weather front, Paris … it’s raining now, a light, steady rain that woke me up and is beautiful to listen to. Perhaps this will cool things down to a crisp 85 degrees (celsius folk: je m’excuse). I was mid-dream that I was organizing Christmas decorations under my bed. I need to clear a lot of clutter when I get home. And other things I’ve been saying for decades.

One of the lovely side effects of travel is that one (this one, anyway) can’t help but hit a re-set button; it offers a break from the day-to-day we get so caught up in that we can’t imagine finding time to implement much needed changes. Both of my travel companions have made resolutions of sorts on this trip, and I have too though I’ve not yet articulated them. But, basically, all the stuff that I’ve been avoiding starting and ending because it’s simply been easier not to needs to be addressed, and so it will.

In a few hours, hopefully after I’ve slept some more, we will go to the Musee d’Orsay, another of my favorite places here. When I spent the semester here I took an art history course and spent a lot of time there “studying”. My final paper was on Seurat; I remember writing it (by hand) in the kitchen chez Madame Francoise, the woman I rented a room from while I was here. It was a much different time; calling home meant waiting outside of phone booths and then trying to get everything into a conversation before impatient Parisians informed me that my time was up. I wrote, and received, so many letters then; the handwritten letter — what a quaint concept. I miss those crazy things. I’ve said this here before.

If anyone wants to write me a letter, I promise I’ll write back.

The light is changing and I’m tempted to take more photos. This city is relentlessly photogenic, from every angle, from the grand, recognizable monuments to the arbitrary side streets, the rooftops and courtyards and food and dogs and people.

Another amazing meal last night, at La Rôtisserie de la Tour, which is the sister restaurant to La Tour d’Argent … and is affordable, where it’s world-famous, Michelin-starred older sister isn’t. We shared everything, and had (vegans, stop reading): amuses bouches of duck pâté en croute, sautéed mushrooms a la Provencale (I’ve had this here before; it is difficult to put into words how sumptuous this chef is able to make a plate of mushrooms), escargots, confit de canard, ile flottante, and mousse au chocolat. Pretty standard fare that, in the right hands, is art.

The richness of the cuisine we are eating here is almost offset by the amount of walking we are doing. Almost.

Back to bed for a few. À bientôt, mes amis. 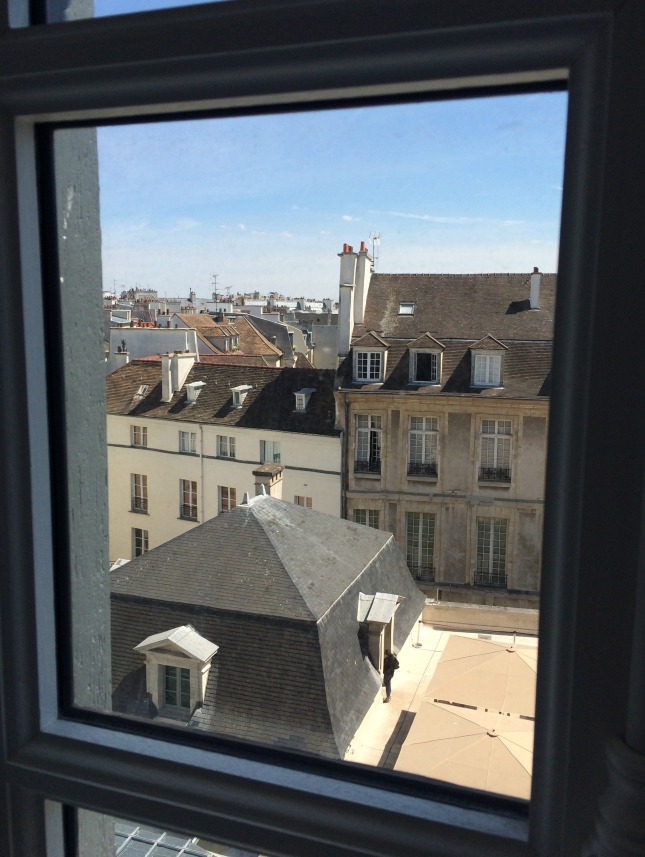 This’ll be the first time I’m returning from Paris with what S called “a killer tan”. They were right; it’s hot here in August! But it’s not unbearable, and the mornings and evenings remain cool.

Having a lovely time, wish you were here.

S asked me if I mind playing tour guide and trip planner when I’m here and I don’t; I love that I get to share the tiny bits of this town that I know with the people in my life, and each time I’ve been has been different — though, of course, some things are fairly consistent, like a first-day visit to Notre Dame, a trip to l’Orangerie to see the water lilies, an aperitif at Les Deux Magots and a pain au chocolat anywhere.

Saturday night we celebrated E’s birthday (and S’s impending nuptials) with a wonderful dinner at Mon Vieil Ami … highly recommend; it’s on the Ile St. Louis and the food is delicious, the fresh vegetables and fruits plentiful, the service excellent. They were even pleasant to the diners behind us who loudly and repeatedly requested steak sauce. After dinner we went to Caveau de la Huchette, a jazz club in the Latin Quarter located in what was apparently a prison during the French Revolution. I love this place — the music is always fantastique and the people-watching sublime. People swing dance here and on Saturday the crowd looked as though they’ve been gathering every Saturday since the place opened in the 40s … we invented back stories for everyone down to poor Blanche, who sat out many a dance looking very depressed, like a woman who’d wandered into a Toulouse-Lautrec painting and drank too much Absinthe, until someone finally asked her to take a spin.

That was a long-ass run-on sentence. Wow.

I’ve not been writing enough since I’ve been here and this has been weighing on me. It’s a very inspiring city but when you are (happily) playing tour guide and walking your minimal allotment of 10,000 steps per day and dining out and meditating for twenty minutes, twice a day … writing takes more of a back seat than it should. I did, however, make some major decisions for the last 20ish pages of my draft, so that’s something. I look forward to diving back into it.

But first I must get ready for dinner. À bientôt.