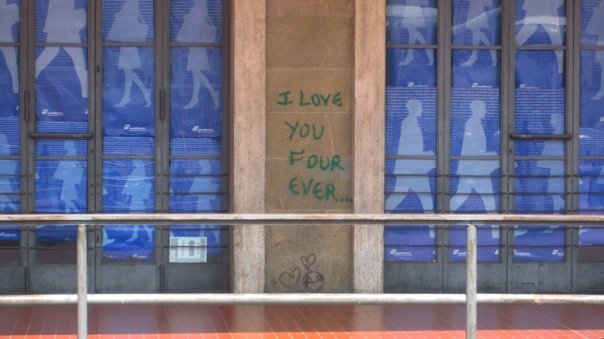 It’s time now, my friend, to acknowledge the thirteenth anniversary of the day your last words were, allegedly, “Oh fuck!” The rest of the mythology of you after the fact is more than I can put into words in this forum.

So, how do I do it this time, Jon? Tonight I realized that you’ve been dead longer than I knew you. But I think we know one another, still. Your parents met my parents this past weekend, at Drew’s wedding. My mom didn’t give great details except to say that your mother spoke kindly of me. I remember the last formal you ceremony I attended – I think it was 2011 because it was a big(ger) deal (anniversary-wise, than usual). I remember your mom said, as we sent balloons into the sky, that she liked to think of you in Hawaii.

Hawaii has come up as a possible upcoming journey friend-and-family wise.I have a feeling, dear, that perhaps I’ll see you there someday.

In one of the final days of Charles Keating’s life one of the boys asked if he was afraid to die. His answer: “Wherever I was before, I’ll be again.”

I recently went through a bunch of boxes that had been in storage in my dad’s office and I found paraphernalia from the early 90s: your roach clip, a – JUST KIDDING THERE WAS NO ROACH CLIP – a couple of photos of you, your then-business card and two handwritten notes you’d sent me. Jay suggested I send copies to your parents’; the card, sure. The rest is actually far more personal and “us” than I think I ever realized existed.

You were so handsome, so imperfectly perfectly handsome. And you were nice to and tolerant of my early-20s friends who probably tacked Hibiscus Margaritas onto your order of Bud. And you made me feel like a smart, kind, interesting and important person.

I remember going to dinner with you at Etats-Unis, which had newly opened, and we had a really good meal.

I remember ordering sushi at your apartment on 70-somethingth street and having you answer my question about what the exact content of meat is as I choked down some eel.

I don’t know what I “own” of this, babe. I know I was way too young to spend the right time with someone like you when we knew each other. But you had an impact on my life that would exist regardless of where you worked that day.

We didn’t have music – we listened to a lot of music – and, of course, you played music, my favorite instrument, actually. I had so many more things on my 23-year-old-brain than what constituted good music. Things you fulfilled, beautifully. Yours were the conversations for which connections exist.

Damn Jon – I wish you’d met Louie! You guys would have gotten each other. I’m grateful he was born 8 months too late to experience 9-11. We’ve been through an awful lot, all being relative, which I know it isn’t.

Sometimes I think you are around, else how would I remain so protected despite my propensity to forget to remember what to do?

The song that makes me think of you is “Santeria” by Sublime. A few years ago I stayed at Sean and Ivy’s – they’d had a holiday party the night before and when Sean, Jay and Dave played, they set a chair for you, for the celestial bass player. The next morning while walking around the kitchen making coffee Sean was singing that song along to the radio – no other reason than that, but I love it.

I have so much more to say to you, my sweet, but I feel like I need to sign off for now and continue to speak to and about you tomorrow.

I love you, my dear friend, and I know you’re in my life.

2 thoughts on “To my colorblind troubadour”